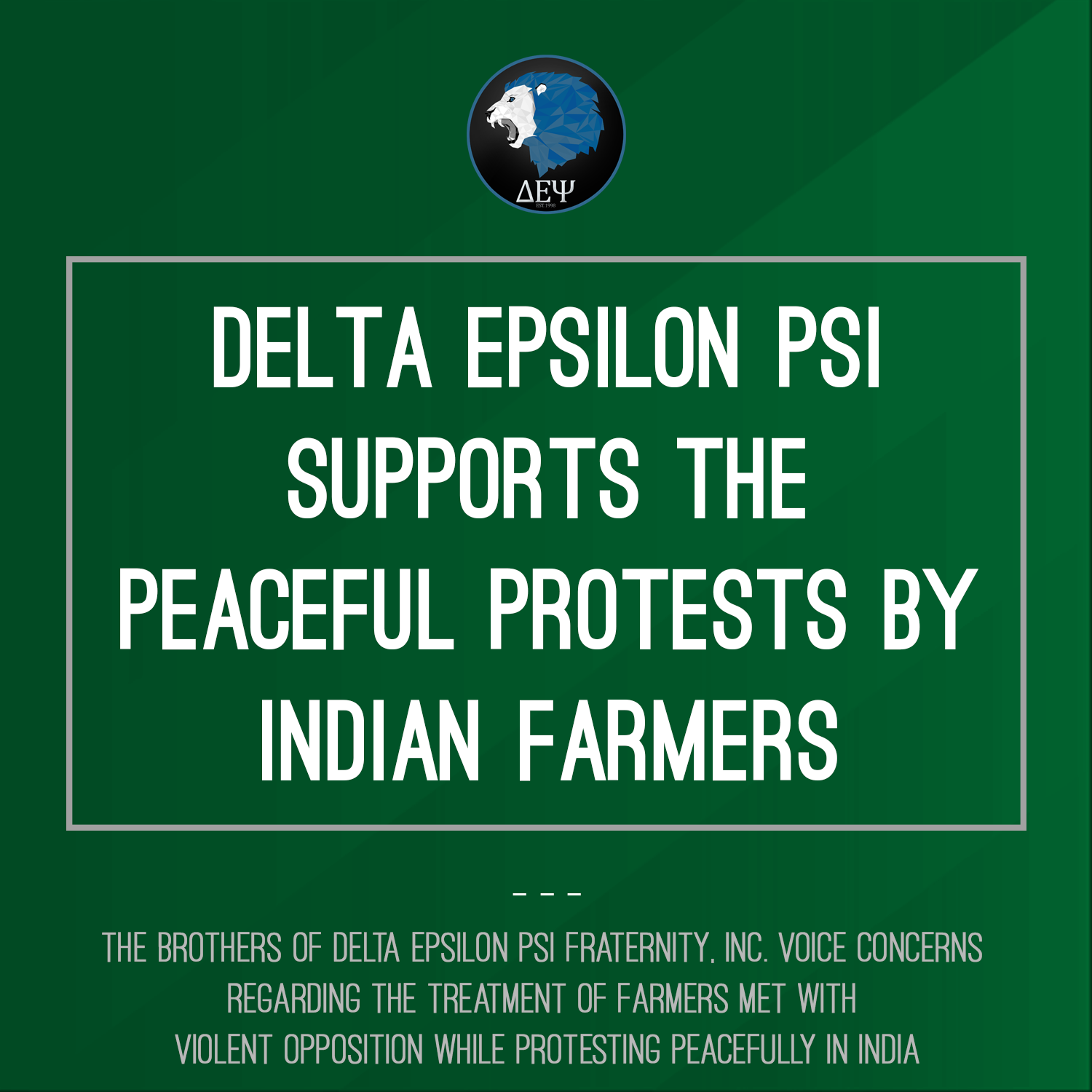 Posted at 17:33h in Uncategorized by admin 0 Comments
Share

We, the brothers of Delta Epsilon Psi, are voicing our concerns regarding the treatment of farmers in India who have been met with violent opposition while protesting peacefully. As a South Asian interest organization, we have a responsibility to highlight the issues that face people of the South Asian diaspora. We understand that although we are an organization based in the United States, our membership holds strong ties to South Asia’s cultural roots and heritage.

India is a largely agrarian society where the agricultural sector employs approximately 60% of the Indian population. The country’s arable land accounts for over half of the total land area; at more than 150 million hectares, it is among the highest in the world. However, a vast majority of farmers own less than 5 acres of land and do not have the means to sell beyond their local markets. Recent pro-market agricultural policies passed in India’s Parliament remove barriers of access for larger corporations in the sector but also eliminate a system that provided small farmers with a level of income stability.

India’s farmers are protesting across state borders in opposition to agricultural policies and have been doing so for months. Not only have farmers’ bodies assembled in various peaceful demonstrations across the country, but they have also further exercised their right to free speech by making pleas to local governments, submitting memorandums, and signing petitions. The most notable of these demonstrations has been the ongoing march to India’s capital, New Delhi. Farmers from multiple Indian states, religious backgrounds, and ethnic identities have marched from their hometowns to the nation’s capital, equipped with supplies and food to last weeks, if not months. However, along their travels, barricades were erected, and roads were torn at checkpoints by law enforcement to hinder their progress. Water cannons and tear gas were used to attempt to disperse the crowds and discourage those marching from pushing forward. A vast number of farmers protesting have made their way to the capital and have continued engaging in peaceful protests, including a traffic gridlock of New Delhi; however, further attempts to hinder farmers in their travels to protest at the nation’s capital continue to this day.

The Brothers of Delta Epsilon Psi Fraternity, Inc. vehemently support the right to assemble and peacefully protest, both in the United States and around the world. Marches, sit-ins, and other peaceful demonstrations are designed to amplify concerned voices, and they should never be met with violence. Attempts to silence those who wish to speak their truth have taken place far too often in modern history. As an organization, we promote equitable and humane treatment for all people, regardless of race, color, religion, age, sex, sexual orientation, or gender identity. We ask of those that share space with our organization, our fellow South Asian organizations, individuals, and allies of the South Asian community alike; to please use your voice at this time to affect positive change in the world we all live in.