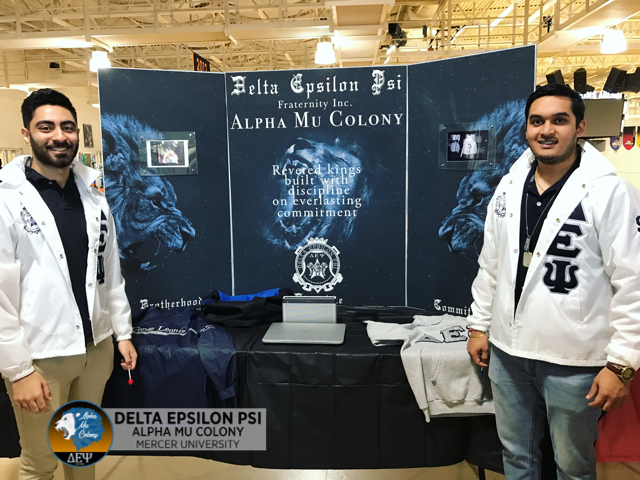 The brothers of the Founding Class of Alpha Mu understand the importance of making first impressions. First impressions are nearly impossible to reverse, making those first encounters extremely important, as they set the tone for all the relationships that follows. Heeding this, Alpha Mu decided to showcase just what kind of grade of fraternity they were by presenting their own information station at Mercer’s 2017 “Bear Fair”. Bear Fair is an event that Mercer hosts in the beginning of Fall semester, specifically the day before the first day of classes, every academic year. Hosted in Hawkins Arena, the home court of Mercer’s Basketball Team, Bear Fair’s primary purpose is to introduce the fraternities, sororities, student-led organizations and clubs to the newest Mercerians.

Upon the founding of Alpha Mu Colony, the brothers were immediately searching for ways to discover potential members for DEPsi. They also were well aware of this opportunity of expansion coming up, and they were immediately set upon their very first attempt at officially recruiting. First, they needed a way to make their fraternity stand out among the Greek life at Mercer, and Brother Vitruvian (Bhaumik Sony) had experience in creating an eye-catching presentation. During the summer of 2017, Bhaumik worked on a tremendous arts and crafts project. He brought the Info-Board to Bear Fair as the representative piece for Delta Epsilon Psi, and caught the eyes of Mercer’s fraternities, sororities, freshmen, and upperclassmen.

Bear Fair was an illustrious way for the brothers to promote Brotherhood and let all of the other organizations know that they are apart of Mercer. A pair of brothers would always be present at our Info-Board. Whenever brothers were not at the table they would either recruit people or visit their student organizations that they are in. Parth, being on the Executive Board, would frequently man the Mercer Masala table. Through this, he was able to meet the incoming class’ diverse South Asian community. Arjun represented the importance of being apart of a student-driven Honor Council as he displayed the value of academic integrity. Quoc had a splendid time catching up with his fellow Mercer Asia members, and Mit would seek out interested cricketers and took them to the Mercer’s Club Cricket Team table. All in all, Alpha Mu was developing as a fraternity and spreading their letters into the minds of passerby and potential new members.

For the brothers of Alpha Mu Colony of Delta Epsilon Psi Inc., this event was important for a variety of reasons. Their target was to make a lasting impression not only to their fellow classmates and fraternities, but also to Mercer University as a whole. They succeeded at awing Mercer at our first public event, and have begun paving a path to their inevitable success at Mercer.