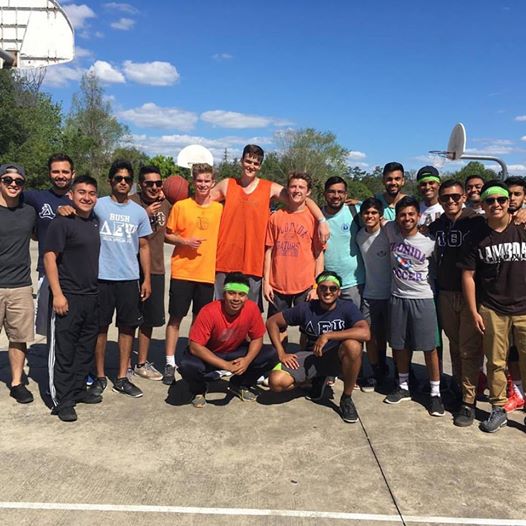 Posted at 19:42h in Philanthropy Blog by admin 0 Comments
Share

Recently, the Rho Chapter of Delta Epsilon Psi co-hosted a charity basketball tournament with our Cuzzo fraternity, the Phi Chapter of Lambda Theta Phi Latin Fraternity Inc.. Together, both of our chapters contributed to throwing a basketball tournament, where all the money raised would go to both organizations’ philanthropies. For those who are not familiar, Lambda Theta Phi’s philanthropy is the Congressional Hispanic Caucus Institute. CHCI is the nation’s leading non-profit, non-partisan organization that provides scholarships, internships, fellowships and other education and career services for Latino youth. Their mission is to develop the next generation of Latino leaders by promoting higher education, providing unmatched career development experience, and award-winning leadership development curriculum. While both JDRF and CHCI received donations thanks to this event, those who participated in the tournament had the opportunity for a cash prize. Teams who participated in either the Competitive Bracket or the Recreational Bracket had the opportunity to win a cash prize of $100 and $50 respectively. Come the day of Conquer the Courts 2K17, there were approximately twelve teams ready to ball the day away. Not only was there a turnout from the Gainesville community and our Cuzzos, but some of our brothers from Theta Chapter, Lambda Chapter, Alpha Iota Colony, and Alpha Mu Colony came to show their support for the brothers here at Rho Chapter. Not only was Conquer the Courts 2K17 a great time for everyone involved in terms of having fun and spending time with brothers, it also provided the brothers at Rho Chapter and our Cuzzos the opportunity to bond and give back to the community in a creative, productive manner that benefited both of our philanthropies, JDRF and CHCI, as well as those in the Gainesville community who participated and won a cash prize.